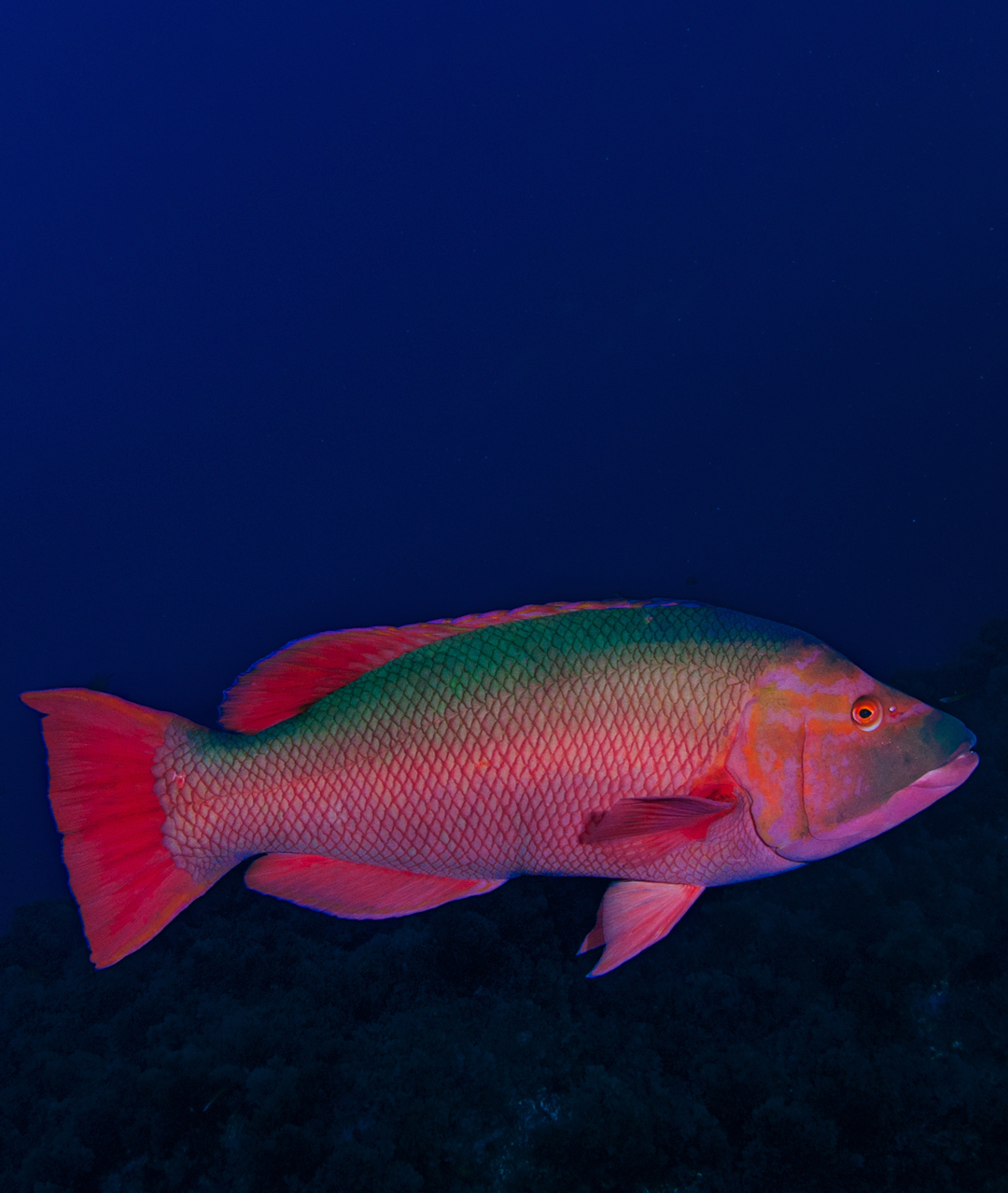 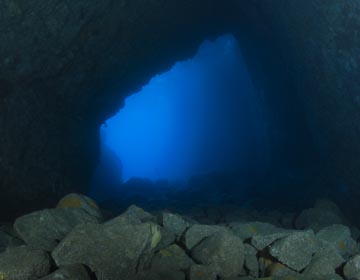 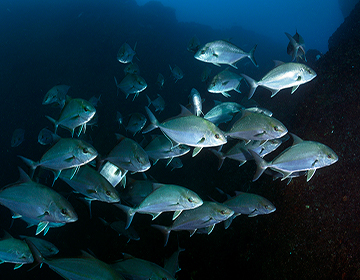 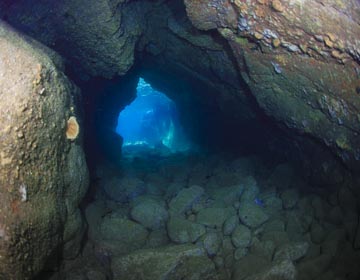 On the East side of the island of Berlenga there is a rock that, due to its threatening behavior in bad weather, won the title of cursed islet. The path that separates this rock from the island has the same name and is, on calm days, a fantastic place for diving. They have the bluest waters of Berlenga, just to start. It has 3 caves, one of which is the largest cave in the entire archipelago, famous for being full of Triggerfish at on season. It also has a ramp area where large schools of Seabream are usually seen playing in the white water and the pelagics, as Bogues also have their role within the bay. The dive is made from the surface to 20 meters deep.

Cova do sono/Hollow of sleep - This is the simplest dive of the Berlengas. Cova-do-sono is a sheltered bay, with maximum depth of 12 meters and in which many times we find ourselves at depths of 2 meters. This can give the idea of an uninteresting diving spot but it is not like that at all. Cova-do-sono has caves with great inhabitants (Forkbeard and Lobsters), has some walls full of holes to look at , excellent for “macro” photo, has feeding areas where the amount of Sea-bream and Cow-bream seem not to have a end. To complete the picture the incursion of pelagics, Jacks and Mackerel, in the bay is frequent. They come to feed on the shoals of small fish that look for shelter there. All this makes that Cova-do-sono is frequently chosen for the second dive of the day, when the divers look for a calm spot but with many points of interest. It is a diving without significant current, with usual visibility of 10/15 meters.

Tromba do Elefante/Elephant's head - This is a sheltered spot in the southern coast of Berlenga. When seas are tuff we can still dive here, where there are lots of cavellets to look for and fish sometimes feed along the the wall, near to the tip of the island.

A very easy and relaxed dive in Berlengas Island. You star the dive on a shallow sandy bottom where you can find some Streaked gurnard and from there you go to a small cavern where you can usally find some forkbeards. You will also visit a small wreck where octopus are common and you can see througout the dive schools the seam breams and cow breams.

This wreck is the easiest one in the Berlengas. Its protected localization allows us to dive there when other places can not be done. Although badly wrecked the Primavera still gives the magic of diving in a wreck. There we can find also Fork-beard, Redfish, Wrasse and Lobsters. John Dory and Sunfish can also be seen.

The Andreos is another sheltered spot, close to the Berlenga, that can be done even with hard seas. The most interesting area is around the boilers, inhabited for great residents but the structure has also many interesting holes to explore. It has usually great pink Sea-bream that swim isolated or in small shoals. For moreover, as it is in an area of current confluence is usual to see Sunfish here.

This reef is located north of the Berlenga. Dangerous for the navigation, it is a fantastic spot for diving. The head sometimes appears out of the water, in great tides, and it has a slope where the water goes up and the fish feeds that goes down until 30 meters. The amount of fish is frequently amazing, Sea-bream, Cow-bream, Sea-bass, Amberjacks and Trigger-fish are frequent. In the deeper part it has walls covered of red gorgonia (Paramuricea Clavata) and one wreck, Gomes VIII, of which we can see the boiler, bits of the engine and still some structure. It is an exposed dive with frequent currents.

As the name indicates this wall is close to the Rinchão. It consists of a reef head that starts at 13 meters with a wall until 35. The wall faces north and is forrowed with the typical red Gorgonia ( Paramuricea clavata). It has small caves also inhabited for great Conger and is an area where one can sight Great Sea-Bass in the deep and Amberjacks in the higher parts.

Baía do Cerro do Cão

This bay is in the northern part of the Berlenga, contiguous to a rock that has the silhouette of a lying dog. It is a bay cut by canyons, always parallel to the rock and one dives from one canyon to the next. It has very interesting passages where for times we find ourselves underneath arches. In the beaten walls next to the Berlenga it has always lots of fish and it is frequent to see shoals of small pelagics in the mid water.

On the northwest side of Berlenga, this is a place that can only be practiced on days when the sea is calm and without wind. Very wild site with very abrupt canyons and rich in schools of sea ​​bream in the "white water". Visibilities are often 15 meters +.